The wind blows gently across the walkway as the leaves sway to the touch of the breeze. It was a cool evening on 11 April 2019. Making your way around the Professors Walk at Melbourne University’s Parkville campus, one could not help but take in the fragrant waft of freshly brewed coffee from the nearby cafe. As you passed by the towering Arts West Building, it might seem like another uneventful evening. However, inside this modernly chic building, a documentary titled Sexy Killers was being played – and it was unlike any you have ever seen before. 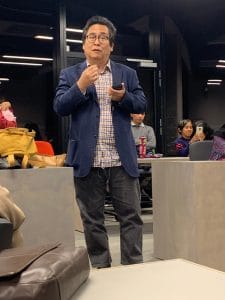 Sexy Killers delves deep into the coal and mining industry by portraying the implications of the industry from the public perspective. The documentary opens with a vibrant portrayal of metropolitan Indonesia and an enamoured couple. Soon, however, the mood turns more serious as the camera shifts to the primary locality of the coal mining – the suburban district. The documentary teases on the fact that the simple supply of constant electricity to the city may have disastrous (and sometimes) fatal consequences for the suburban residents. The screening itself ran for approximately one and a half hour before an open floor session was conducted with Ms Lilis Mulyani, Dr Richard Chauvel and Ms Max Walden as the speakers.

The quest for coal has brought about the woes of farmers and fishermen alike. For the farmers of East Kalimantan, coal mining deprives them of their land and pollutes the surrounding water. Coal mines have taken away huge patches of and that used to be the land of the local farmers, taking away their territory and cordoning off areas for mining purposes. Protests fall of deaf ears as the farmers struggle to put their case forward for trial. The presence of coal mine has also made it hard for local farmers to gain access to clean water for drinking purposes. Pollutants discharged by coal mines and their surrounding power plants have contaminated the clean water source in the Mahakam River and the locals are left with unhygienic water for their daily use. Even when the mines are no longer functional, the coal quarries are not properly restored to its original state, leaving dangerous open holes around the settlements where kids may inadvertently fall down whilst playing. 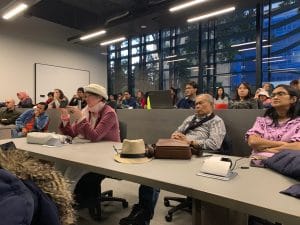 For the fishermen, the presence of huge tankers around the water has brought about a devastating effect on the coral reefs and their livelihood. Huge numbers of coal-carrying tankers often anchor around the ocean area, blocking access to the water and damaging the coral reefs with their anchor. The damage to the reefs scares and discourages fishes from coming back, resulting in a lesser catch for the fishermen. There are also a few instances where tankers capsize due to overload, further polluting the water. Met with so many difficulties due to the presence of tankers, it is unsurprising for the fishermen to launch a protest against the mining industry.

As the documentary concluded and the floor was open for a Q&A session, the audiences engaged in a deliberative session where they each expressed their own views of the documentary. Among others, there were questions on why maintaining an environmentally-focused party had been a challenge in Indonesia and questions on the plausible alternative energy sources to coal which were not addressed in the film. With so many questions abound, a particularly strong one stood above the rest – should Indonesia abolish coal mining altogether, are the alternative energy sources and infrastructures in Indonesia able to support the country’s electric demand for the unforeseeable future? Perhaps this can be food for thought in itself.