Leadership for Senior Multi-faith Women Leaders is the second short course about Indonesian women’s leadership that Australia Awards hosted. The first course was in 2017 for Muslim women’s leadership. Deakin University of Melbourne was selected to host the short course again for their success in managing the first. During the Pre-Workshop at 14th-16th August in DoubleTree Hotel Jakarta, Daniel Hunt, Australia Awards Indonesia’s Program Director explained that the Australia Awards is a cooperative program between the Australian and Indonesian government through the Australian Embassy. There are several programs from various disciplines. After the course, hopefully alumni from all disciplines, professions, organizations, institutions, and regions can connect and network to share experiences and create opportunities to collaborate.

As much as 27 women’s leaders from six religions and their related organizations, universities, government representatives, and non-profit organizations passed the selection. After the Jakarta Pre-Workshop, they underwent the short course in Melbourne at 10th to the 21st September under the guidance of Dr Rebecca Barlow as the Program Director and Course Designer, Prof Shahram Akbarzadeh as the Project Manager and Course Advisor, and Annemarie Ferguson as the Course Consultant and Project Official.

During the course, participants took part in various scheduled activities at several venues. A majority were held at Deakin University. On the second day, they visited The Women’s Information Referral Service (WIRE) , Multicultural Center for Women’s Health (MCWH), and Australian Muslim Women’s Centre for Human Rights (AMWCHR). Twice, Queen Victoria Women’s Center hosted the activities. On the 15th of September, they visited the Darebin City Council to participate in the Hindu festival Ganesha Chaturthi and a dialogue with members of the Darebin Interfaith Council.

In the Course, participants met with 16 speakers and panelists from 9 organizations who gave informational and inspirational talks according to their specialties. Course sessions also included mentoring to help improve each participant’s study project, which they are obligated to execute after this short course. The study projects will take place for 6 months, from October 2018 to March 2019. A Post Workshop to evaluate the projects’ progresses will be held in January 2019.

Visits to the Parliament House and City Gallery deeply impressed the participants, especially when exploring the Victorian architecture of their interiors. After course schedules, participants ventured out to discover Melbourne’s beauty. They hopped on Trams to points of attraction. Queen Victoria Market became the favorite shopping hub, apart from Brighton Beach, Phillip Island, National Gallery, Shrine of Remembrance, and the Melbourne Star. 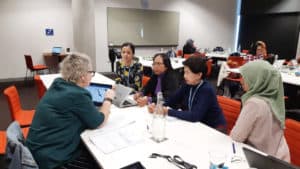 The group received a precious chance to celebrate the 73rd Anniversary of the Indonesian Independence Day thanks to an invitation from the Indonesian Embassy, held in Pullman Hotel on September 17th. Ms. Ariella Hana, a participant, relayed the group’s presence to the Indonesian General Counsel to Victoria and Tasmania, Ms. Spica Tutuhatunewa. She was also present in the certificate awarding ceremony in the Windsor Hotel.

Before returning to the homeland, the group stayed in Sydney and visited the Botanic Gardens, Sydney Opera House, and the Harbour Bridge.

All participants would like to thank Australia Awards for the opportunities, facilities, and programs they provided.