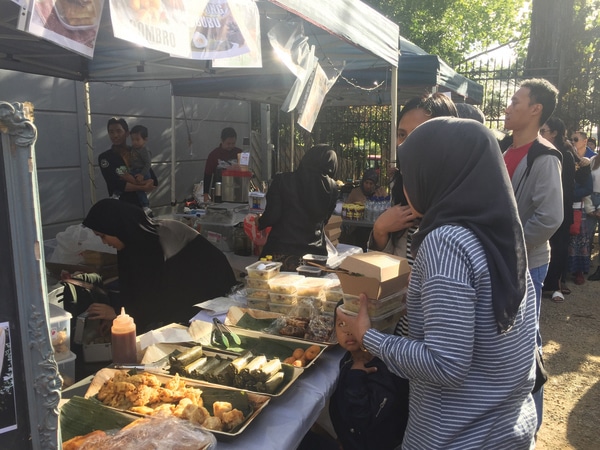 It was the 3rd of November 2018. Alighting from the tram, I made my way toward the Consulate General of the Republic of Indonesia. A bustling night market was taking place, and it’s unlike any other. It’s the one and only biennial Parahyangan Night Market 2.0.

Organised by the talented members of Paguyuban Pasundan Victoria, the Parahyangan Market 2.0 defied the odds of the orthodox night market. Working closely with and supported by the Consulate General of the Republic of Indonesia, the night market aimed to encourage members of the community both Indonesians and non-Indonesians to drop in, relax, dine in the delicious food and drink and enjoy the beautiful music and Festoon Lights against the evening backdrop while experiencing the richness of Indonesian food and music. 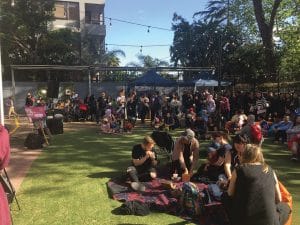 For the children, there was also a kid’s corner with various carnival games to try out. With such a family friendly engagement, it was not surprising to see many of the people who come were also bringing their family members and children along. To put it in one sentence, it truly felt like a family picnic bazaar – a fact that was also confirmed by Mr. Satianugraha Saefullah or more amicably known as Kang Cepi, the Head of Paguyuban Pasundan Victoria.

When interviewed about the reason whether there will be any future intention for the night market to be organized annually, Kang Cepi confirmed that there will be. But, the fact that the night market is biennial also makes for good surprises and builds anticipation for the people – partly the reasons why they decide to organize it biennially. They also brought back the carnival game and kid’s corner this year as they were popularly demanded during the previous night market. Moving forward, Kang Cepi also hope for the night market to continue in the future and to be more known by the local citizens of Melbourne.

The night market started off with the singing of Indonesia Raya and the reciting of Sumpah Pemuda. Upon asking members of the flag raising troop, Bang Ferry and Kak Suci, they explained that “This is to simultaneously commemorate the 28th October’s celebration of Hari Sumpah Pemuda and 10th November’s celebration of Hari Pahlawan.” Afterwards, the night market officially kicked off. The crowd started visiting the different stalls and the band filled the place with jazzy tunes and pop music that further brightened up the evening. The Parahyangan Night Market 2.0 was now in full force.

Slowly but surely, the crowd started to build up as the day went. Stepping in, you couldn’t help but notice the smell of satay wafting in the air as it tickled your nose and drew you in. But of course, satay was not the only food available for purchase at the night market. There were waffles, hotdog, fried wonton, fried tofu, pisang bakar and even candy floss to choose from. If you felt like going for a full dinner, stalls were also selling packed rice combo for purchase. When you finished eating, there was also coffee available for sale at the stall. With so many selections, it was hardly surprising that food would become one of the main attraction of the night market. In fact, when asking Mrs. Sherry Abdi, Head of Dharma Wanita Persatuan, on what she likes most about the night market, she said that “As long as there is good food, [I will] definitely [come]!” This also rang true to Mr. Tony Hunt; when asked the same question, he answered, “The highlight is definitely the food and the music!” So, as you can see, the evidence is clear. 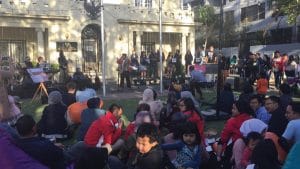 Aside from the food, the night market also introduced the audiences to the traditional musical instrument, the angklung. A number of angklung with different musical keys were distributed among the audiences while they were taught how to play the instrument. After the lesson, the audiences then demonstrated their understanding by playing the angklung (together with a vocalist) to the song titled “Halo Halo Bandung”. It was a new experience for many and definitely one that would not be easily forgotten.

The highlight of the day however, went to the quiz show “Berpacu dalam Melodi” hosted by none other than Kang Cepi himself! The rules were simple. Three teams with three members each, three game rounds and three different rules of the game. In the first round, a singer will sing five different Indonesian anthem and the team would have to continue from where the singer stopped. Every correct answer here would yield one point. In the second round, each team would get to choose a music genre and would have to guess the five songs sung by one of their members corresponding to that genre. Every correct answer will yield one point. The final round consisted of nine songs and the team would have to guess the title and the singer. But there’s a catch! Only one instrument will be playing the melody of the song, so it was not as easy as it sounds. 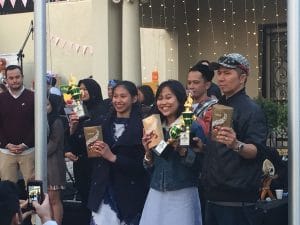 After an intense battle, group C seemed to take the lead during the first and second round. Confidently marching toward the third round, the audiences were surprised when group A managed to turn the tables and won by the final round! It was a battle well fought and well-earned indeed.

As the festivity came to a close, Parahyangan Night Market 2.0 was truly unlike anything ever experienced before. For you who have missed it, be sure to save the date and drop in next time!