Home Events An Evening Talk with Master Lu on Buddhism 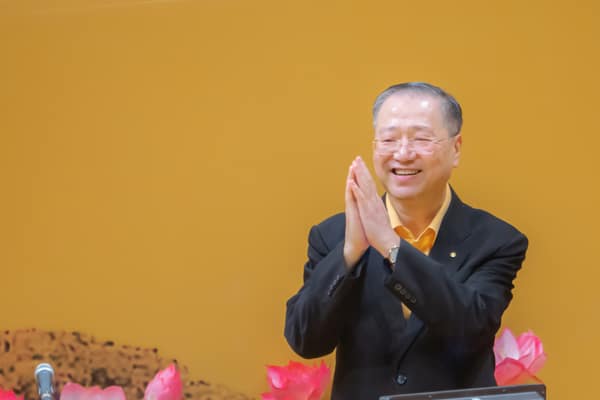 It was a sunny Sunday on 8 December 2019 in Melbourne. The Melbourne Convention & Exhibition Centre was unusually crowded amidst the warm summer sky. As always, the tram stop opposite the Crown Casino and South Wharf DFO were teeming with people. If you looked to the right, you might also chance upon an enthusiastic Darth Vader cosplayer jamming the guitar with some curious tourists recording the familiar scene. Or, if you happen to be an avid customer of the South Wharf Melbourne DFO, you may find yourself waving at the familiar face of Darth Vader as you stroll along the wooden pathway heading toward DFO. Indeed, it would have been the perfect day for a good weekend shopping and a year-end discount hunting. However, the day was no ordinary one. It was the one day when Master Lu, the leading Dharma guru of Guan Yin Citta, was to come and visit Melbourne for his annual visit.

Walking straight along the inner corridor of Melbourne Convention & Exhibition Centre, you could clearly see the direction pointing toward Room 6 of the adjacent building where the talk was being held. Before 1:30 P.M., people could be seen gathering at the front of room 6 browsing through dharma books which were up for grabs by the door side. Some visitors also visited the translating booth to ask for a portable translating device to help them understand the talk. It was broadcasted in full Chinese so being able to listen to a translated version of the talk in full time was highly helpful for some people. As the clock hit 1:30 P.M., the door opened for the visitors to enter, thus marking the start of the talk.

The session began with a 30 minute welcome from the house MC. Marking the annual visit of Master Lu to Melbourne, it was refreshing to see more and more followers crowding the theatre. The session continued with a quick sharing of the crisis which had been going around the world and a joint prayer session where followers were asked to pray together to wish for the best for those in times of needs. With the introductory speech done, followers were then asked to stand up as they gave a standing ovation to Master Lu as he entered the auditorium.

Master Lu then shared more of his experiences visiting different temples of the Guan Yin Citta around the world. In Australia himself, he had visited both the Sydney and Melbourne temples. Comparatively, he said that he was impressed to see more followers in Melbourne than Sydney and wished for the trend to continue. The session was then followed with a dharma sharing with Master Lu on the cycle of rebirth and a reminder to always be aware of one’s karmic due. With the sharing session done, Master Lu then invited some of the followers to come to the front should there be anything they wished to share or check.

Up to ten different people walked to the mic and shared their woes. Some were asking for guidance on their family, business, children and parents. Some others were asking to check on their passing relatives and where they are now. Inserting some mild joke here and there, Master Lu took the questions of each follower and checked on their requests before advising them on how to improve their relationship or where their family members are residing now. Not long afterwards, the session thus concluded with a final message from Master Lu. “Remember that everything you do will incur a karmic debt. Whether it will be a good or a bad karmic debt, only you know it best. It does not always have to come immediately, but when it does, it will always be just.”

With that the session ended with yet another standing ovation and a full heart for the followers.

Behind the Curtain of Indonesia Film Festival