It was Friday, 9th November 2018. Cloudy sky and cool wind made the picturesque evening even more stunning as I made my way to Monash Conference Centre. The NAILA 2018 Awards Evening was about to commence. Since its inception, NAILA has been focusing on bridging the gap between Indonesia and Australia by promoting cultural exchange through language and strengthen the relationship between Australia and Indonesia. In their journey, NAILA is backed by various sponsors. In fact, The NAILA 2018 Awards Evening was sponsored by The Australia-Indonesia Centre, Australia-Indonesia Institute, Australia Indonesia Business Council, The University of Melbourne Asia Institute, Monash University, Deakin University, Netfare Travel and Cinta Bahasa and supported by Perhimpunan Pelajar Indonesia Australia (PPIA) and The Australian Consortium for ‘In-Country’ Indonesian Studies (ACICIS). 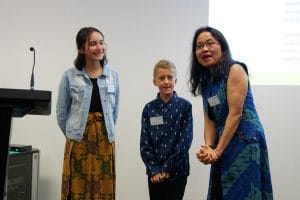 The evening began with an opening speech by the founder of NAILA, Ms. Madilyn Hill. Following the speech, she then introduced the four judges who would be joining the awards evening: Ms. Yacinta Kurniasih, Mr. John H. McGlynn, Ms. Jane Ahlstrand and Ms. Svida Alisjahbana. The introduction was followed with an opening speech by Ms. Helen Fletcher Kennedy, the Chief Operating Officer at Australia-Indonesia Centre, explaining passionately that “… being able to communicate in others’ languages is also a form of respect.” Then, Ms. Spica A. Tutuhatunewa, Consul General of the Republic of Indonesia, shared her gratitude for the teacher, government, sponsors and students who had come down and chosen to pursue Bahasa Indonesia. She also introduced the theme of the writing for 2018: Diversity or Keanekaragaman. 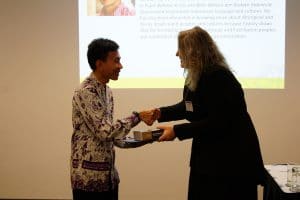 After the inspiring speech, the evening moved on to its main event: the revelation of the winners and awardees for the NAILA 2018 Awards Evening.

The primary awardee went to Blake Johnson, a 9 year old Primary 4 student who has been learning Bahasa Indonesia since Primary 1. 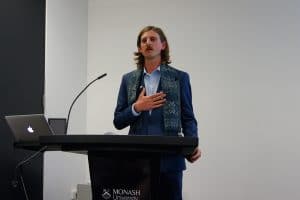 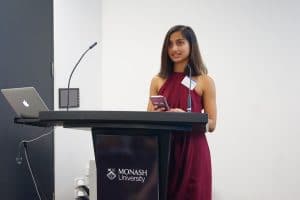 The middle awardee was clinched by Sreeya Das from Lyneham High School in Canberra who is currently studying under the LEAP (Lyneham Enriched Academic Program) Program.

The University of Melbourne Asia Institute Senior Awardee recipient was Rya Hwight who has been studying Indonesian for the last 4 years in Perth.

The Australia-Indonesia Centre Tertiary Awardee went to Ellen House, currently on the third year of her Bachelor of Arts (Language) degree in The University of Sydney and majoring in Indonesian Studies.

The Executive awardee recipient was Bryanna Wilson who is currently living in Jakarta with her husband and children.

The native speaker awardee category was won by Adrian Liem. Born and raised in Lampung, he is currently completing his PhD at the University of Queensland (UQ).

The wild card awardee went to Iven Manning, a student of Indonesian and Linguistics at the University of Western Australia.

The people choice award winner went to team Aku Cinta Indonesia. As many as 600 votes were casted for the video.

As the night concluded and moved to its networking session, it was truly encouraging to see so many local enthusiasts interested in learning more about the Indonesian culture and language.