Home Events A Sunday Afternoon of Music from Indonesia and Thailand 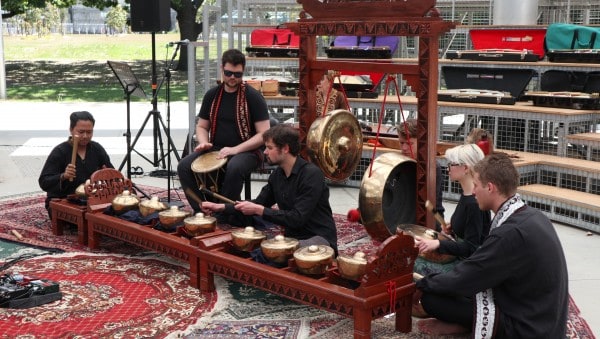 In the beginning, Professor Margaret Kartomi as the Director of MAMU, opened her speech about her excitement to launch this event for public also continue with the speech from Ibu Spica A Tutuhatunewa (Consulate General of Indonesia in Victoria and Tasmania). Henceforth, Monash Talo Balak Ensemble became the first performer to entertain the audience. The Talo Balak is a gong ensemble from Sumatra’s Lampung Province of Indonesia. A hand-crafted material of the traditional ensemble features drums, gongs, cymbals and combines multiple characteristics of ensemble from three different areas in Lampung: Kotabumi, Kuripan and Maringgai which make it is suitable for playing repertoire from those regions. There were five pieces of Talo Balak performance from Melinting Culture in Maringgai, East Lampung, Sumatra in this concert started from Tabuh Samang Ngemuk, Tabuh Cetik, Tabuh Kedanggung, Tabuh Kenilu Selawik and finished in Tabuh Arus Panjang. 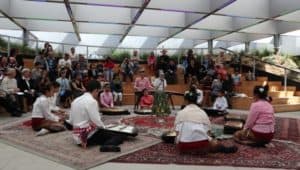 The performers of Talo Balak Ensemble were Mitchell Mollison, Phillip Dallas, Ning Hall, Rayhan Sudrajat and Douglas McDowell. The next performance was Rayhan Sudrajat with his traditional instrument called Sapé (a lute from West Kalimantan, Indonesia). The sapé was originally a 2-string lute played for rituals to induce trance. Sapé music is usually inspired by dreams and the music played in a single mode accompanies dancing in a men’s longhouse and dancing in a women’s longhouse. 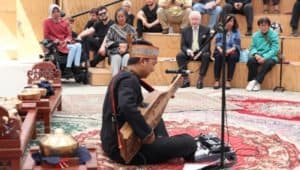 Before the last performance from Thailand, there was a speech from Dr Simon Wallace (Consulate General of Thailand in Melbourne) and continued with Thai Khim (Dulcimer) Ensemble. There were four part of this performance: Serng Kratip (a Thai folk-dance which tells the story of the wives making the journey out into the fields to bring lunch to their husbands who are working on the farm); Lao Duang Duan (a famous classical Thai piece, composed by a Thai prince around the 1880s); Lao Kratop (a traditional Thai folk song) and Loy Krathong (a famous dance which is typically played everywhere in Thailand during the week of the Thai Loy Krathong Festival).