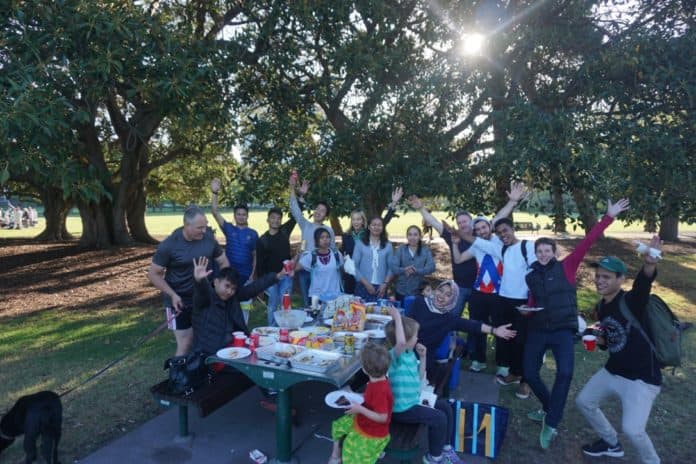 In Australia, two experiences which we consider uniquely Australian are having a BBQ and playing Aussie Rules. On Sunday 21 October, at the iconic Fawkner Park several of the Indonesian participants from the Australia Indonesia Youth Exchange Program (AIYEP) experienced both of these for the very first time.

The afternoon began with an Aussie Rules session as the participants trained together with the Krakatoas, an Indonesian-Australian Aussie Rules team in Melbourne.

During the training session, players learnt how to kick, handball, mark and shoot for goals as well as some of the basic rules of footy.

After the footy drew to a close, the AIYEPers joined their Krakatoas teammates for a BBQ. AIYEP host father and Krakatoas supporter, Peter Addison explained that BBQs are an important part of Australian culture. 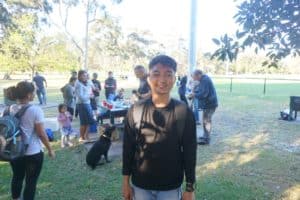 “A BBQ is a really informal way for Australians to socialise; you don’t have to be the best cook in your family and everything’s pretty easy. On public holidays often family and friends get together in a park or someone’s house, the meats usually pretty cheap, easy to cook and pretty tasty,” explained Peter.

For the Indonesian participants of AIYEP, the experience of having a BBQ with friends was hugely positive. Barep Alamsyah loved eating both the lamb and beef, which was prepared that afternoon.

“I’m full of lamb and beef meat. I love the lamb,” explained Barep.

Meanwhile, for Popy from Jambi she absolutely loved the BBQ experience.

“My stomach is going to burst actually. I can’t afford it [all the food], but I really want to, the chicken sausage is especially good,” she explained.

The AIYEP program runs for four and a half months with host cities being Melbourne and Bendigo in Australia this year; participants will also spend two months in the province of Riau after finishing the Australian phase of the trip.

The BBQ was a joint initiative of AFS Intercultural Programs and the Krakatoas Football Club, Melbourne’s first and only Indonesian-Australian Aussie Rules team.