Home Lifestyle Ozip Travel Indonesia, a home away from home. 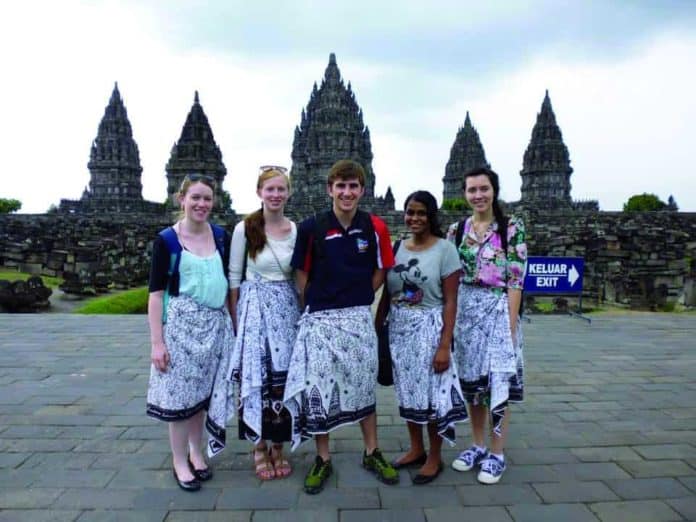 Amodi, Clarice, Jesse, Sam and Sarah of Monash University travelled to Indonesia with the purpose of improving their Indonesian language but came home with that and much more.

A home away from home is hard to find. Getting to class was daunting but taxi’s ordered by the homestay and school eased things. Transyogya busses aren’t too scary either – overly friendly bus staff lead to funny memories. Thinking back ordering food was trickier than transport. The few menus and rehearsed script didn’t ease the confusion. Still, we rarely had a wrong order! In the end Tiga Lima Homestay became home because like family they were always looking out for us. 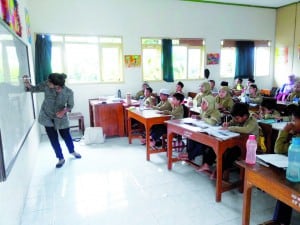 When it came to class we spent our weekday mornings sitting in a tiled classroom as it poured outside, studying Indonesian under the guidance of Bu Ningsih and Mbak Asih of Puribahasa Language School. We focused on translation, vocabulary, and grammar, learning about a new topic each week, as well as exploring Javanese culture and Indonesian politics in an effort to soak up every ounce of Indonesia that we could. In our final week the school hosted a cooking class, giving all the students an opportunity to mingle and help make tempeh goreng, sambal, and nasi goreng.

Along with language classes we were given the amazing opportunity to teach English through Ahmad Dahlan University, at SD Muhammadiya Prambanan and SMP Muhammadiya 3 – Depok. When we arrived at the schools the children seemed incredibly excited at the thought of having foreigners as teachers. While the children were initially shy and slow to interact with us they soon warmed up to the idea. For us it was a real mental challenge to teach in Indonesian, a language that we are not entirely fluent in but everyone from both schools made it a really valued and worthy experience.

Along with academic activities, Sam and Clarice challenged themselves to hiking the very daunting, Mount Merapi. Standing at 9,610ft, the 7 hour hike from New Selo was well worth experiencing the breathtaking Javanese views from the summit. Beginning the trek at 1am along with some fellow tourists and very knowledgeable guides, many members of the group felt like quitting the task, as the mountain simply never seemed to end. However, as the top was finally reached, the sun rose and the clouds dispersed and the incredibly physically demanding task all of the sudden seemed well worth the effort.

While in Yogya we couldn’t miss visiting Prambanan and Borobudur. Spending Australia day at Prambanan it seemed like it was going to rain however the weather held off to give us a spectacular view of the temples and gave the experience a sense of eeriness as the age of the monument became really apparent. At Borobudur we opted to watch the sun rise above the temple from a viewing platform in the forest and afterwards began the trek up to the top. While we journeyed around the temple we encountered what seemed like a never-ending number of enthusiastic school children almost dying for photos with us. While this went on for some time the view from the top of Borobudur was spectacular and something that none of us will ever forget.

Leaving Yogyakarta on 1 February the group headed to Singapore, with Clarice then heading to North Sumatra, Sam, Sarah and Jesse to Penang, Malaysia and Amodi to Sri Lanka. They met up in Jakarta on 11 February and flew back to Melbourne, with a day stop in Brunei Darussalam on 14 February.