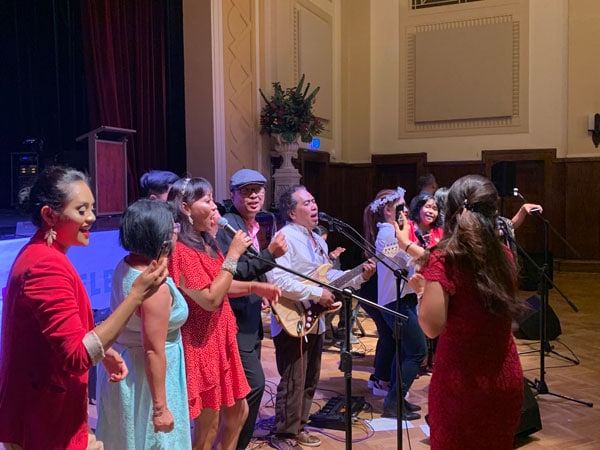 The clock was ticking for the dinner to start at Box Hill Town Hall, situated at 1022 Whitehorse Road, Box Hill, VIC 3128. Slowly but surely, guests and their family were starting to crowd the hall as they struck friendly conversation with other fellow guests. The lights were dim and the surrounding air was as romantic as it could be. In the middle of the hall, one cannot help but notice the long red carpet leading to the stage front, reminding the guests of a beauty pageant show. During the pre-show, some early guests may notice a group rehearsal of women dressed in beautiful and colourful dresses for the upcoming show. Or better yet, some may had the chance to strike up some friendly conversation with the band members sitting by the right hand corner of the stage. As guests started to crowd the hall and made their way toward the decorated dinner table, the time finally came for the show to start. At 06:40 P.M., the floor was open for the two MCs to introduce the night.

Edward and Lucia, the duo MC of the evening, opened the night with a brief introduction of themselves and Aneka Ria Melbourne. Started with a simple get-together among fellow Indonesians, the community group of Aneka Ria Melbourne has since become one of the most active members of the Indonesian community group. With the introduction done, the duo MC invited Mr. Glen Hulley, the founder of Project Karma, to share a few words of his own on the exploitation of children in South East Asia. After the speech, appetizers were served to the guests as the dinner started. The delicious food accompanied by the melodious tune was the perfect combination to a memorable evening.

Before long, the time came for the fashion show. The fashion show itself was divided into three different sessions, each showcasing different garment and theme. It started with the traditional dress, which was then followed by casual and evening dress. In each session, the models lined up and marched one by one beautifully on the red carpet, showing the guests the beauty of each garment from the front and the back. The fashion show was also led by Lucia, one of the dup MCs, who shared her extensive knowledge in describing each and every garment in the purest beauty. Her achievement of being the winner to the title Ms. Coral and People’s Choice in Mrs. Globe Australia also allowed her to lead the fashion march and offer tips on how to look your best in the runway.

Aside from the fashion show, members of Aneka Ria also danced away in front of the stage and invited guests to dance together with them. Their light legs hitting the floor with gusto and the entire hall was full of rhythmic sound accompanying the melodious singing. Singing and dancing to various familiar Indonesian songs, it was not long before the contagious music also prompted some of the other guests to come up and join the dance. Truly, it was a sight to behold.

As the show and dinner slowly approached its end, the time then came to announce the winner of the raffle. With a nervous expression each contestant waited curiously for the name of the winner to be announced. When the winner was announced, so was the prize – a full night’s stay at Melbourne’s Crown Hotel. The hall was beaming with surprise and clapping followed suit. With that done, the duo MC finally announced the end of the show and guests slowly made their way home, satisfied and happy after a good night’s fun.

THE 12TH ANNUAL MUSIC EVENT SOUNDSEKERTA: SERENADE FOR THE NATION