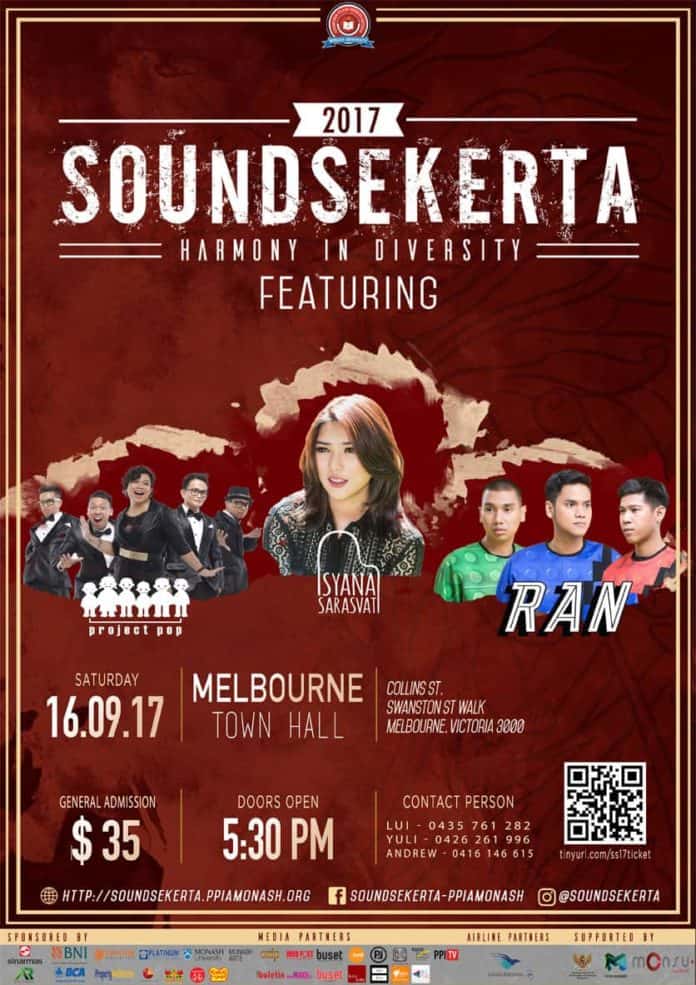 THE WAIT IS FINALLY OVER! For the 11th consecutive time, PPIA Monash proudly presentto you, Soundsekerta 2017. This year, the biggest Indonesian music festival in Australia is back with the theme “HARMONY IN DIVERSITY”. This acts a reminder of the beauty which exists within differences. Music knows no boundary and does not differentiate between gender, race, ethnicity, religion, and ideology. Instead, it is a vehicle to strengthen the unity not only between Indonesians living in Melbourne, but also people who appreciate and have interest in the beauty and culture of Indonesia.

Soundsekerta2017 will be held on 16th September 2017, located in the heart of Melbourne CBD: Melbourne Townhall. Throughout the years, we have invited top performers from Indonesia to entertain audiences such as Tulus, Kahitna, Noah, Nidji, Opera Van Java, and many more. This year, we have the privilege of having guest performers you will surely love and enjoy! Are you ready to find out who we have on board? Here it is!

First, the beautiful and talented Isyana Sarasvati. She is a singer and musician from Bandung, who is known for her golden voice and two of her best hit singles, “Keep Being You”& “TetapDalamJiwa”. The recipient of “Best Graduate Award 2015” from NAFA also managed to capture the attention of Sony Music Entertainment Indonesia with her vocal abilities and her involvement in the opera and classical music during her studies in Singapore. Beginning her debut in Indonesia in the year 2015, Isyana has won numerous awards in the music industry.

Second, the youthful pop and R&B band formed in 2006, RAN, famous for their catchy and energetic songs. The band name itself is an abbreviation of the names of the 3 members: Rayi, Asta, and Nino. By combining various types of musical elements in their songs such as jazz, soul, hip-hop, and R&B, RAN has made it to the Indonesian music charts with their songs: “Dekat di Hati”, “PandanganPertama”, “SelamatPagi”, and many more. After more than a decade of contributing towards the music industry, RAN has successfully released 5 albums and won various awards.

Last but not least, the legendary comedic band, Project Pop! Formed in 1996, Project Pop consists of members Yosi, Udjo, Gugum, Odie, and Tika. They are widely known for the creativity exhibited in the lyrics of their songs, and their humor portrayed in live performances. With more than 21 years in Indonesia’s music industry, Project Pop has successfully released 9 albums with chart toppers such as “Dangdut is The Music of My Country”, “Bukan Superstar”, “GoyangDuyu”, and many more.

So, what are you waiting for? Grab your ticketsNOW and don’t miss out on Soundsekerta 2017! You don’t want to wait until the following year. In addition, we also have great voucher deals, which come with the purchase of your Soundsekerta tickets, from Mabrown, Pepper Lunch, SaleroKito, Hot Star, Rice Paper, and Gong Cha! AND there will also be a chance for you to win a set of Beats headphone and an iPad as door prizes. For more information, you can visit our website at soundsekerta.ppiamonash.org and FOLLOW PPIA Monash on Instagram, Facebook, Twitter, and Youtube for the latest updates on Soundsekerta 2017.

Walking Down the Memory Lane with Alun Alun 2019 “Tempoe Doeloe”