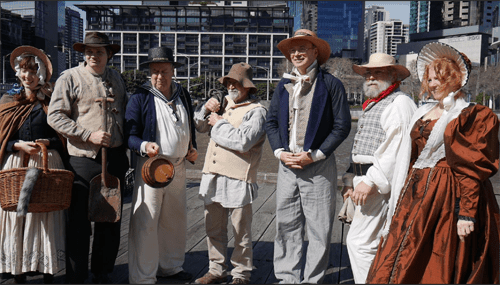 The official Melbourne Day flag raising ceremony was held at Enterprize Park, Flinders Street Melbourne on Wednesday 30 August 2017 to commemorate the 182nd birthday of Melbourne. This ceremony started from 11 am to 1 pm, attended by Acting Lord Mayor Arron Wood, Melbourne Day Chairman Campbell Walker and committee, city councillors, invited guests, dignitaries and Sienna Koop as the 2017 Junior Lord Mayor of Melbourne. There was also the marching band of Victoria Police Pipe Band, Enterprize’s re-enactment crew first settlers in period costume, and together with the round of Melburnian celebrating our City Day.

The ceremony is started by the performance of the big band Victoria Police crossed the Queen bridge. Continued by a wind instrument Didgeridoo, played by an Aboriginal artist Stan “Yarramunua” Dryden. He also called all Melburnians to be proud of their city and not to change historical monuments amid a national debate on the issue. Hereafter, the welcoming speech by Arron Wood, Campbell Walker, and also Sienna Kopp was officially begun the raised of the City of Melbourne flag.

Sienna Koop from Aspendale’s St Louis de Montfort’s School, was declared as the Junior Lord Mayor competition winner at a ceremony at Melbourne Town Hall on 24 August, 2017. This little big boss of 2017 was in mayoral robes, said that she loves everything about Melbourne, especially the culture, sights, people, events, activities, festivals and opportunities to get out there and live life to the full.

The celebration of Melbourne Day this year actually started on Sunday, 27 August 2017 in Docklands. A program of free entertainment, music concerts of Melbourne ‘80s rock bands from the main stage, also hundreds of cupcakes that stole the show. Melbourne Day is a free public event, where school groups, families, and everyone is welcome to bring the whole flock.

*Did you know? Enterprize Park is where the first Europeans landed on the north bank of the Yarra River 30 August 1835 to start the first permanent settlement of Melbourne.