Home Events Celebration of Indonesia 2017 The Beauty of Eastern Indonesia 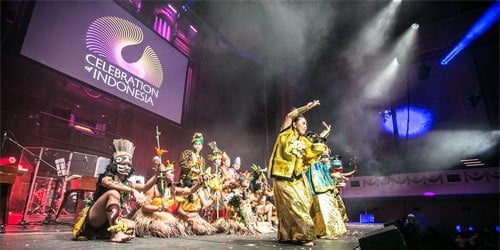 In order to celebrate the 72th anniversary of Indonesian Independence day, Indonesian communities around Victoria especially in Melbourne had join hands together creating a grand cultural night Celebration of Indonesia (COI) on August 5th 2017 at the Melbourne Town Hall. This year’s theme is uniquely new, the hidden treasure, the beauty of Eastern Indonesia, as an effort to preserve the nation’s identity. More than 300 local performers and supporting team, presented Indonesian culture and language through creative mixed of modern and traditional music, dance, as well as drama performances.

The event successfully attracted the audience of over 1,500 individuals from all walks of life both Indonesians as well as Australians with a vested interest in the Indonesian cultures. COI 2017 has “flown” the audience to several islands in Eastern Indonesia, from Makassar to East Nusa Tenggara, then Maluku to the most-far-east Papua. The stage is “colored” by vibrant appearance of traditional dances, such as Lenso, Tokesi, Gaba-Gaba, and Papua dance.

This event collaborated dance groups all over Victoria, Sanggar Sang Penari Indonesia, Bhinneka, Lenggok Geni, Sanggar Widya Luvtari, Indonesian Club and Sanggar Lestari. Typical music instruments from Eastern Indonesia like Sasando, Tifa, Kulintang is also sounded to accompany the talented choirs. All the performers are from Indo-Australian societies, students and local artists, which made this event to be very inclusive to local communities that unite through performing arts.

“Not only creating a memorable experience for its audience, COI also strive to promote a stronger community cohesiveness and sense of belonging for Indonesian communities, including students, family, business people and other ethnic groups in Victoria who hold interests of Indonesian culture,” said Sherley Hadisaputra as the Project Director of COI 2017.

COI 2017 is supported by communities and organisations including City of Melbourne, Ministry of Tourism “Wonderful Indonesia, the Consulate General of the Republic of Indonesia, Garuda Indonesia and over a dozen leading media in Victoria.