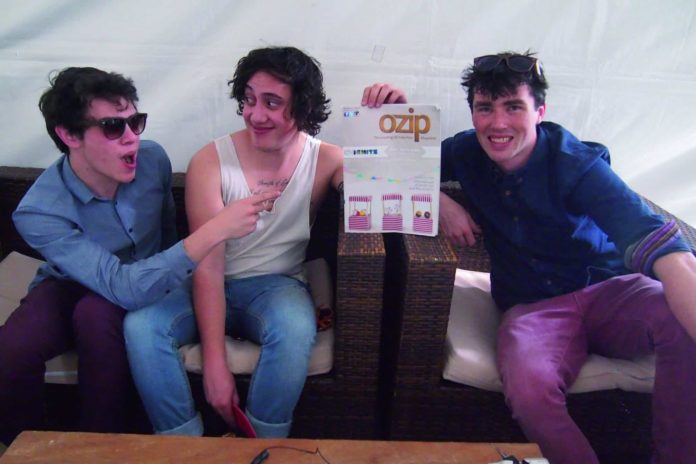 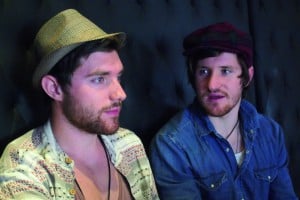 Josef: We’re twins and we grew up in Germany. I moved to Australia like a year and half ago, Jan moved here about six months ago. We make music together and we both play guitar and piano. So we’re an acoustic duo. We don’t really have a lead singer, because sometimes I sing the main part, and sometimes Jan does.

Jan: I started singing when I was 13 years old, and not long after that Josef started singing along with me. We then stopped doing music and did our own stuff when we finished studying. Josef went traveling and stayed in Australia, I went back home and did music with my band in Germany. And we kind of missed making music together, cause it’s different with your brother. So, we decided to make music together again, and start the whole thing together.

3.            I caught you several times busking in the city and drawing impressive crowds, I was just curious, how did you first get involved with busking in Melbourne?

Josef: When I first came here about summer last year, I was busking alone and I had a small set up in front. I made like 4 dollars, and that was my first day busking. And then Jan came here and we got a bigger set up, and we started busking on Southbank, in front of the library, and on Bourke St Mall. It’s been great busking with your own brother and knowing that a lot of young people are watching us and listening to our music.

Jan:  You play all of the songs at least 5 times a day. You really put everything in when you play the first few songs. And then at the end of the day, when it gets to the fifth times, you’re starting to lose the spirit. And if nobody’s listening, it’s kind of frustrating and you start to feel “okay, this doesn’t feel so good”. While when you’re doing a show, people mostly know you and they are there because of you, so you can just relax and play the songs.

Josef: With busking, people don’t buy tickets, if they like it, they will stop and watch you, but if they don’t like it, they’ll just keep going. But it gives you more freedom, you can arrange your own set-list and time to perform.

Jan: People keep telling us that we’re funny when we talk, I don’t know why, maybe because of our accent. And we love telling stories when we perform, so people tend to listen to us more when we tell a story before playing a song. It’s not like a big show where people jumping and screaming. They would just stand or sit down and listen to us.

Josef: You just get annoying people sometimes. They’re drunk and screaming at you and throwing things.

Jan: And we just usually ignore it, keep calm, close our eyes and be in the zone, thinking that they’re going to walk away.

Jan: In Germany I was writing songs on my own, and Josef did the same thing here, and Josef showed me some of his songs and I did some of mine too. And it was the hardest part, I kind of felt like killing him at that time, haha. Because I didn’t like his songs and he also didn’t like any songs that I wrote too, so we thought we had to figure the way out, otherwise I’m gonna go back to Germany. And we decided to write our first song together from there and we picked the best 5 songs to be on the EP, and named it “It’s Not Words”.

Josef: It’s great, I mean we should always help people who aren’t lucky as you are. So, some people are born in other parts of the world with little possibilities to do the things that they want, so we’re here to support those people with music. We gotta enjoy the sun today, share the moment with other musicians, like Woodlock and Fox + Sui, and of course with the audience today.

Josef: Just believe in yourself and believe in what you’re doing, whether it’s music or anything, just keep going no matter what people tell you.

Jan: I would say in the future people should be more open to new stuff, and shouldn’t be too focused on something that only because everybody is doing it, you think it’s the right way. Don’t get too focused on money and such, try to enjoy the little things around you. 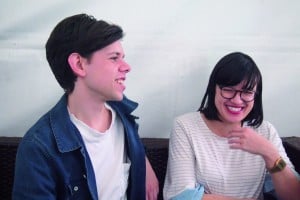 Becky: I’m from Sydney and Andy’s from Melbourne. I started things with folk music with the guitar, and I met Andy overseas from the music academy that we were both involved in 2010. So it’s like a program that happens every year, and we didn’t know each other before. But then we got up to each other, we knew we’re both from Australia and we ended up meeting and making music together since that.

Andy: Yeah. It did, I mean I was making my own tracks that were going be released by myself, and I needed something new like vocals or something, so I sent them to Becky, and she started singing on them and sent it back to me while she was overseas.

Becky: For me, with people sending me stuff I kind of can tell instantly if I want to sing on them or not, but with Andy’s, I pretty much want to sing every stuff he’s sent me. His tracks are always easy for me to sing on, I would just sing all of them, if I was allowed to, haha.

Andy: I have a really specific taste in music, just from collecting records for quite a really long time, even almost more than making it. I like the idea of people trying to make pop music but with no money, like they’ve only got like 20 dollars instead of a thousand dollar studio, so it’s like attempted pop music with no money and limited equipment. And a lot of interesting music can come out from that kind of situation.

Becky: It’s funny how people keep asking us if our music is experimental because it’s weird or whatever. We’re just really trying to make pop music, but it just comes out weird. I’ve always tried to make music that I hope people will like, but sometimes it just sounds a little bit different from what we thought.

Andy: Blurry pop, I guess, like island music. In the early 90’s or 80’s there was a number of people from Europe doing a tropical music, so it’s like music inspired by tropical environment.

Becky: Music that people would make to emulate a place that’s not where they’re from. So, it’s people trying to reinterpret Brazilian and Latin music but with a European electronic context.

5.            Knowing that both of you come from a different musical background, could you tell me more about the recent EP you have released? How has it been?

Becky: Pretty good. We got to do a nice project and meet new people. We both got up from solo practices and ended up together, so we had to find a meeting point between what he does by himself and what I do by myself. Andy does more dance music, and I do more song based, pop music kind of style. It’s quite challenging to find that meeting point, because if one was not satisfied with their own individual pursuits, it would not work because then they’d be putting too much on their own work.

Andy: The same thing happens with this collaboration, you really have to let it happen when you’re ready to work together, cause if you want to be forceful and push something upon someone else, it’s not going to be easy, and that’s when bands break up.

Andy: Just some regular rehearsals. With our kind of sound you have to be constantly checking if your piece of electronic gear hasn’t died (laughs). 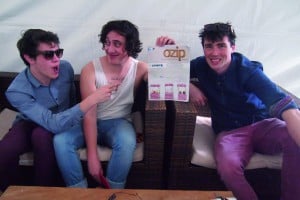 “On the street, we are more of a discovery thing. So, when people walk and see you, they’ll be like ‘Oh, who’s this band?’ and if they like it, they’ll stay and listen to us. Tapi kalau kamu di panggung, ada sebuah ekspektasi tertentu dari orang-orang karena mereka mengenalmu, jadi kamu harus perform lebih baik,” ungkap Zech.