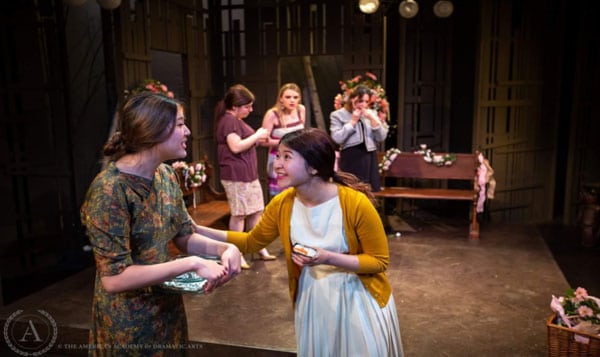 Raised in Jakarta, Indonesia with a family culture focused on the banking industry, Grace Chim never imagined that her childhood dreams of being an actress would come to pass.

Graduating with a Bachelor of Business degree from Monash University, she worked as a Marketer for a few years afterwards. It was only until her faith in God stirred her to pursue the secret desires of her heart in the performing arts realm that she decided to accept her study offer at the oldest acting school in the English world, the American Academy of Dramatic Arts (Academy alumni holding a total of 110 Oscar®, 318 Emmy®, and 95 Tony® nominations). She then bravely moved to New York City with no prior training nor experience to pursue her dream education. She says “I remember how intimidating it was being in a class or even walking the streets of NYC surrounded by people who have been dancing/performing since they were the age of 4, while I was raised to be in the financial industry since I was young. Insecurity could’ve swallowed me, but now I realize my weakness is a gift because I know all this wouldn’t have happened without the grace of God”.

Since graduating in April 2019, Grace has done plays Off-Broadway, starred in several short films with prestigious filmmakers, modelled in New York Fashion Week 2019 and made a living as a commercial actor in the infamous New York City. She is now back in Australia awaiting one of the independent films she acted in entitled “I, Portrait” (directed by Award Winning Producer/Director Nathan Hill) to be released in various new media platforms this January 2020 including Amazon Prime. Her recent 2019 filmshoot titled “Breaking the Silence” (directed by Award Winning Producer Seayoon Jeong), where she was privileged to be a lead actress in, is also planned to be released this 2020 and will be showcased at various film festivals. So folks out there, do be on the lookout for this rising Indonesian star!