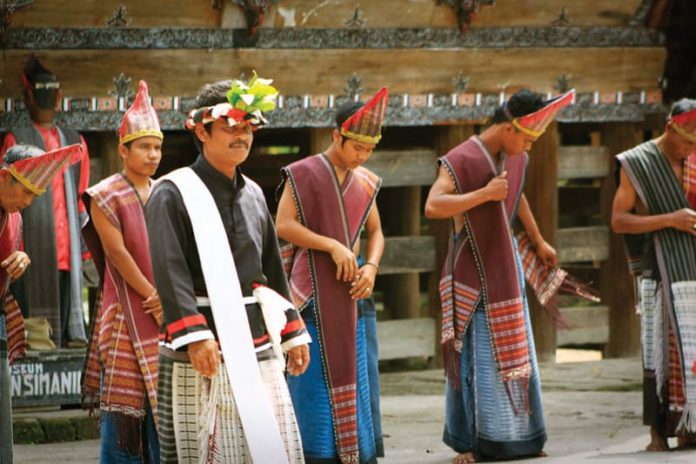 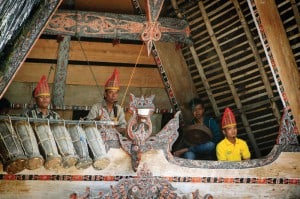 Indonesia has been long known as a big mixture of people, tradition, and values, creating a unique system that share the definition of “Indonesian’s Culture”. However, we should admit that several ethnic groups soar more than the others do. Let us try to throw a little question. In your opinion, which Indonesian ethnic group that people “sounds” in modern living but still sticky with the tradition? I guess, “Batak” would be on the A-list!

Modern People, Traditional Wedding
Batak people, without the exception of the ones living in big cities around the world, are strongly holding the cultural values. Starting from kinship system (we are familiar with Sitompul, Hasibuan, Aritonang, Hutagalung, Rajagukguk, etc, aren’t we?) to the customs especially made for specific commemoration (baby, children, teenager, marriage and funeral). In the atmosphere of Valentine’s Day, let us checking out the unique Batak’s wedding tradition, starting from patiur baba ni mual (request of blessing) to marunjuk (the wedding party).

A. PATIUR BABA NI MUAL (Permission and Request for Uncle’s Blessing)
The groom’s family executes this first procession to hula-hula (the bride’s cognomen). Unlike the western tradition where wedding is seen as a close-family matter, Batak tradition sees wedding as a big-family matter. According to the tradition, the first soul mate of a man is the daughter of his tulang (a term for uncle). Therefore, if the chosen bride is not any of tulang’s daughter, then the groom’s family should ask for tulang’s permission and blessing. Uniquely, this procession is done only once for the first son to be married.

C. MARHUSIP (Secret Negotiation) and PATUA HATA (proposal):
Both paranak and parboru are now accompanied by raja parhata (custom’s king). Paranak comes to parboru’s house to deliver tudu-tudu sipanganon (roasted pig or buffalo’s head) and parboru replies the gift with dengke (carp fish). Soon after this, families from both sides will discuss the wedding arrangement, led by raja parhata. There will also Pinggan Pasu Panungkunan, a symbolic plate prepared by the bride’s family to initiate the wedding discussion. Pinggan Pasu Panungkunan consists of rice, betel leaves, and four bills.
Directly after marhusip, raja parhata leads the formal wedding proposal. The unique thing is, during the proposal, both of the bride and groom are hidden so that they are not involved during the negotiation.

D. MARTUMPOL
This is basically a wedding announcement in mosque, church, or any religious place to ensure that there will be no objection in the future.

E. MARSIBUHA-BUHAI (holy matrimony)
Early in the morning, paranak will bring margoar or sangsang (a typical food made from porcine blood) to pick the bride up. Parboru will also prepare carp fish so both families may have breakfast together. After having breakfast together, the bride and the groom are marched to the mosque or church. 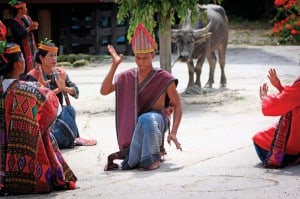 F. MARUNJUK (custom party)
We arrive in the most exciting part of Batak wedding! The party! As both families arrive in the building where the party held, the ritual begins with giving traditional food to each other. Paranak presents tudu-tudu ni sipanganon (whole buffalo or pork that is ordered in special manner) to parboru, and again parboru replies it with carp fish.
During Marunjuk, there is one most iconic procession called Ulos Hela and Ulos Passamot. Ulos, Batak’s traditional fabric, is indeed the most valuable wedding symbol according to Batak’s tradition. During Ulos Passamot, the bride’s parents give ulos to the groom’s parents as a symbol of prosperity in the future.
On the other hand, Ulos Hela is presented for the newlyweds. The bride’s parents will put the Ulos on the newlyweds during the party. “The conferral should be done with extra care. For example, parents’ hand should touch the newlyweds’ hand as a symbol of blessing. The Ulos itself should be made connected exactly in the middle, in front of the newlywed,” explained Ibu Martha, the founder of Martha Ulos wedding organized that specialized in Batak Wedding. After the Ulos procession completed, the bride’s parents will scatter rice all over the newlyweds’ head three times as a prayer for them to be healthy, strong, and able to endure any problems that might happen in the future together.

Epilogue
As the old saying, marriage is once a lifetime. So, make it worth it. Batak tradition has shown on how special a wedding can be. It is a celebration for the lover, the family, and even for the big circle of relatives. What a happy celebration! Aside of that, it is also wonderful to know the rich diversity of Indonesia’s wedding traditions!

Pentingnya Memilih Asuransi yang Benar – What to do when your...