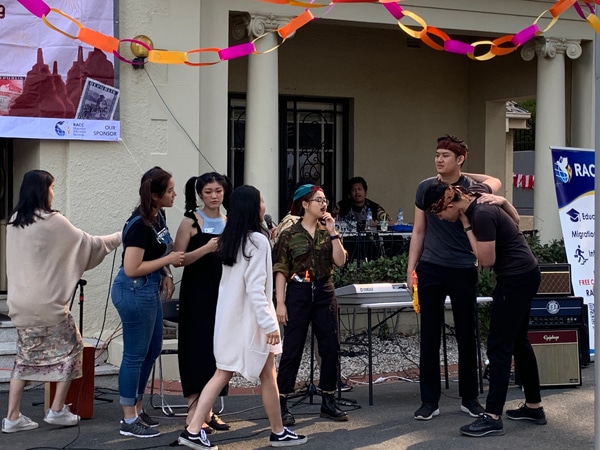 When nostalgia strikes, it is hard to ignore the pure bliss of reminiscence coursing through your mind. As you walk down the memory lane, you rekindle and rediscover who you were and who you have become over the years. Such was the emotion felt when you first step into the ground of The Consulate General of the Republic of Indonesia in Melbourne located at 72 Queens Road, Melbourne VIC 3004. It was Saturday, 20 April 2019 and ‘tis 10:00 A.M. in the morning when Alun Alun 2019 officially started. This event itself is held every year by PPIA (Perhimpunan Pelajar Indonesia Australia) Victoria in order to introduce the student-led organisation to newcomers and current university students alike. The event also provides an opportunity for each of the PPIA branch to promote its upcoming event to students. This year, the theme of Alun Alun 2019 took you deep into nostalgia with Tempoe Doeloe as the surrounding was beautifully decorated with colourful ribbons and the stalls were putting up Indonesian local delicacies for sale. It truly felt like coming back home to the days of old. 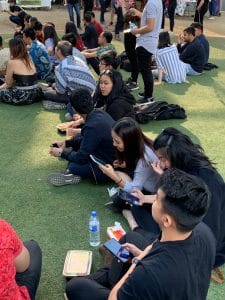 Making your way around, you first saw a collection of pictures outlining the progress of Indonesia from 1945 onwards. In 1945, Indonesia first achieved independence; in the 1950s, the first general election was held to elect the House of Representatives and constituent members; in the 1960s, Tugu Selamat Datang was built to welcome the athletes of the 1962 Asian Games; in the 1970s, Monas was opened to the public; the 1980s saw the publishing of Petisi 50 and the 1990s was marked by the flourishing entertainment industry in Indonesia. It truly felt like you were revisiting past memories that made up the young nation of Indonesia. Accompanied by student bands jamming to Indonesian music and songs, one could not have asked more for a home away from home. 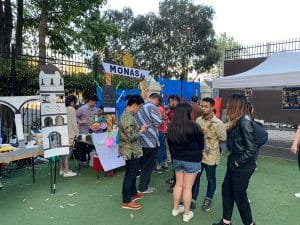 Whenever you were feeling hungry, you could also pick your lunch from the stalls. Run by the respective PPIA branches from different universities, each stall offered a range of drinks and food for you to grab. If you were feeling thirsty, you could order some Milo Dinosaur for some out-of-the-ordinary drinking experience. If you were craving for some good meatball, there were some beef meatballs up for grabs as well. The stalls also featured some of the more popular dishes such as nasi geprek and nasi padang for you to choose from. Coupled with affordable prices and some on-the-spot entertainment, the afternoon was perfect for an outdoor picnic with your friends.

So folks, the next time you are trying to decide on a festive autumn picnic with your friends, you will definitely have to consider Alun Alun as a plausible destination. After all, it’s not every day that you get to satisfy your craving for Indonesian food – especially when it comes to street vendor food. As a plus point, you would also get to listen to band covers of popular songs such as My Heart Will Go On and Mission Impossible.

So what are you waiting for?