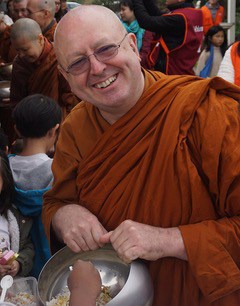 Smiling from ear to ear; Ajahn Brahm, a highly regarded Buddhist monk, spiritual adviser and author departed on a cold Victorian country morning to fly home to Western Australia after leading the very successful week of Vesak celebrations in Melbourne.

The Buddhist Society of Victoria welcomes Ajahn Brahm annually to celebrate Vesak week known around the world as the birth, enlightenment and passing away of the Buddha. This is a significant spiritual day for reflection and celebration within the community.

Vesak celebrations commenced on the evening of Saturday the 2nd of June with Ajahn’s talk: AFL; Accept. Forgive, Learn, followed on the Sunday with the traditional ceremony of Dana offering. His two sold out public events culminated with in depth Meditation instruction, one of the cornerstones of the Buddhist practice.

Ajahn Brahm’s discussions and teachings attract Buddhist and non-Buddhist followers eager to learn more from his unique insight into almost any subject imaginable, entwined with his famous sense of humour.

Ajahn Brahm signed hundreds of his books during his time in Melbourne for the lucky ticket holders and posed for countless photographs.

The celebration of Vesak ended with a two-day meditation retreat at The Buddhist Society of Victoria where participants silently and mindfully brought their awareness into the present aided by Ajahn Brahm’s knowledge and wise guidance.

The communities’ annual support of the Buddhist Society of Victoria’s Vesak celebrations enables it to be a growing and highly popular event.

Basa-Basi AIYA: Looking Back at the 2019 General Election