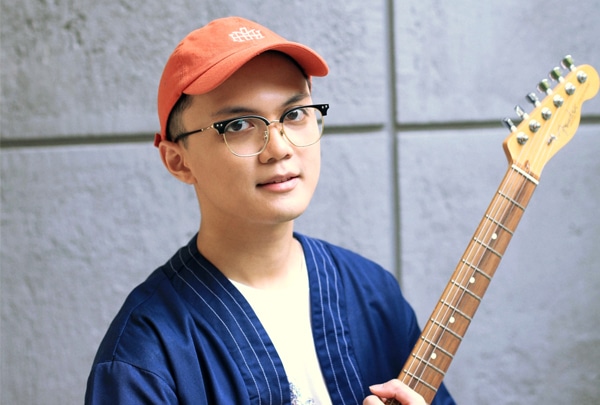 In rememberance of the National Music Day (March 9), OZIP presents a story about an authentic talent of a young Indonesian named Amadeo Ardisa or simply called Deo. He initiated Pocka. as the way to reflect on his passion in music. As a Melbourne graduate, his musical works portray his admiration for the city. Do kindly enjoy the story we have prepared on this talented musician!

When and how did you start playing instruments and making music?

Wow, I think I started playing musical instruments around 4 years old. Piano was my first instrument for about 7 years. Around 2005, I stopped and switched to electric guitar! If I’m not mistaken, I wrote my first song back in 2007. I was in a ska/punk band back then, so I wrote a lot of political songs, on top of your typical teenage love songs.

What do you enjoy the most about music? What’s your biggest music influence?

Music makes me feel and think about so many things. It can be political, cultural, emotional, inspirational, everything! It can also make me feel at ease, and be in the present. I love so many types of music that I just get lost in them! A lot of bands and musicians really influenced my songwriting process, so it’s always a mixture of everything. But if I have to give my current influences, it would be Vulfpeck, Cory Wong, and the lo-fi genre. I’m also into funk now!

Tell us more about Pocka.!

I started Pocka. around October 2020, it just so happened that I got to reflect on who I am as a musician, or on my relationship with music in general. I think my decision to have a break from my 8-5 job was also very helpful. I feel quite privileged to have had that off-time, especially during these hard times.

So the name Pocka. was actually inspired by a musical term “in the pocket”, which means in the groove or in-sync with the rhythm when musicians jam. I’m a rhythm person, I love groove, rhythm, bass, and percussion! I feel like “Pocka.” has a nice ring to what I do and create as a musician. I love lo-fi vibes, and marrying pop, funk, and lo-fi makes me feel happy. I think nowadays, you can make lo-fi out of anything. I listen to lo-fi all the time, to get those groovy and chill vibes anytime I want. When I listen to chill lo-fi songs, they make me feel grounded, nostalgic, and clear-headed. But the music that I create won’t just be chill lo-fi vibes. Expect more exciting things in the future!

So far I’ve released three singles and are all very chill and lo-fi! My three singles share the same point of inspiration, which is Melbourne. Melbourne is just so amazing, and having spent almost 7 years living in Melbourne I developed a certain musical image of what the city is like.

My first single “Morning Brew” came out of my love for coffee and morning commutes in Melbourne. I’m not sure if you notice the train announcement I put in the song! My second single “Flinders St” is inspired from probably one of the most popular streets in Melbourne. I think it just captures the hustle-bustle of Melbourne, where the tram bells ringing every minute! And my latest single “Low Tide” is about calming down and taking myself to a happy and peaceful place. I personally love the sound of water, and I felt so grounded when I wrote this song.

How are the responses from listeners?

I know that my music is not quite in the popular spectrum of Indonesian music, so I’m so grateful for people who have been listening and giving my music a chance. Most listeners who came back to me really understand what I wanted to convey through my music, and that’s just so important to me. I love you all!

You can totally expect a lo-fi EP in the near future! I love collaborating with other musicians, so it will feature a few of my talented musician friends. I might also sing in some of my future songs. We’ll see!

How do you see Pocka. playing a part in the music industry?

I want to bring a more interesting sound to the people who listen to my music, especially in terms of rhythm, grooves, and vibes. The music industry has evolved so much due to streaming services, and I want people to actively discover all the great music out there! Even better if they even buy the songs/albums!