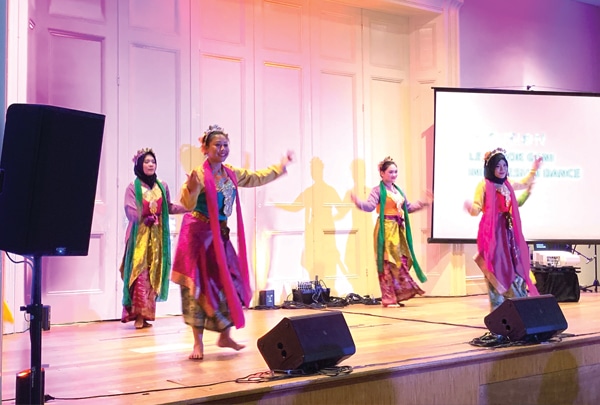 It is easy to lose your way as you first enter the ground of Abbotsford Convent. The serene surrounding of the convent makes for an ideal place to sit down and chill with a bottle of beer on your hand. Making your way around, you will soon realise the vastness of the convent itself. To your right, you will see the main building of the nunnery. Walking further down the pathway, you will find that hidden amidst the white wall is a big room whose exterior reminds you of a Victorian era Greek architecture. Located on Rosina Building of the Abbotsford Convent, INFUSION 2019 was underway. 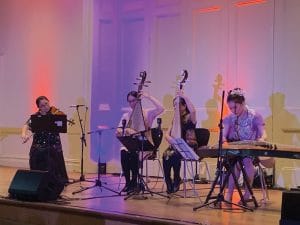 Organised by the Melbourne University Buddhist Studies Society in 24th March 2019, INFUSION 2019 featured musical and dance collaboration and performance brought to you by students, professionals and maestros alike. That’s not all. The concert also invited various community groups and cultural performers to showcase their native songs and dances. Be it an Indonesian folk dance, a Tibetan one man show, a traditional Cambodian dance or a contemporary piece performed using both western and eastern instruments, you were guaranteed satisfaction the moment you step into the hall and sit yourself down. Accompanied by the gentle rustle of leaves in the wind, the dreamy evening truly felt like a scene out of a movie – a pleasant illusion that was meticulously maintained throughout the entirety of the concert.

The first performance was a beautiful orchestral piece by the Chao Feng Chinese Orchestra. A non-profit Chinese Orchestra based in Australia, the group has been promoting traditional Chinese culture and music in Australia since 1982. Having performed for a multitude of academic and community functions, they have built themselves a strong reputation and had been invited to perform at Melbourne Arts Centre and National Gallery of Victoria. With the beautiful rendition of their instrumental tunes, the concert opened on a calm note for what was to come. 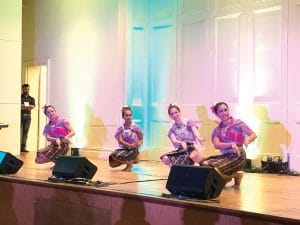 The fun did not stop there! INFUSION 2019 was about diversity, acceptance and multiculturalism and that was what the concert wanted to emphasise. Audiences could also take part in a mini-game called “Guess the Anthem” where (as the name suggests), they had to guess which country the anthem originated from. A correct answer would be rewarded with interesting gifts. It was interesting and heartwarming to see participants raising up their hands in a race to be the first one to answer. As the game was conducted during every intermission between different songs, it was refreshingly exciting to see audiences prepare themselves for the game as well.

The show continued with many more amazing pieces. May Wang and Xingyuan Guo, a talented pianist and cello respectively, performed a duet on the anime theme of “Totoro”. They would return for a collaborative performance with Nalanda Robson, Ann Rann Wong, Maggie Milne, Wang Xiaomei and Xiaoyan Li to bring another anime movie theme from “Princess Mononoke”. Complemented by the sound of the rushing wind and the rustling of the leaves, the entire performance felt very much ethereal.

When it comes to dancing, the concert featured the traditional Cambodian Khmer dance, Thai Dulcimer, Sivalai Thai Dance and Apsara Sri Lankan dance. Each one of them showcased a colourful and vibrant representation of their respective cultures – the Khmer dance was a gentle and beautiful reflection of the sacred Cambodian culture, the Dulcimar dance used a pair of bamboo as percussions for the dance, the Sivalai Dance chronicled the tale of wives making their way to the farm to send lunches to their husbands and the Apsara Sri Lankan dance combined the symbolic meaning of the dance with powerful energy and steps. 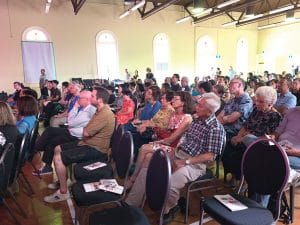 As for Indonesia’s culture, Lenggok Geni stole the limelight with their colourful and beautiful dances. The first one on the list was the Betawi dance, a vibrant folk dance from the Betawi ethnic group. Once the dance concluded, audiences were asked to stand up and dance together for the next one – the Maumere dance. As the tune played, the crowd gathered and danced together in a euphoric display of fun and camaraderie. To make the experience all the more immersive, staffs were also invited to join Lenggok Geni on the front stage as the hall turned wild with excitement from the sway of the music. It was an unexpected call, but it was definitely a very much welcomed surprise!

Finally, there was also a one man’s band performed by Tenzing Yeshi from Tibet. He explained that music has always been a spiritual part of Tibetan teachings, a statement that was proven throughout his performance. With his legs, he stepped on the wooden floor and emanated a percussive beat, with his fingers, he played a tune to accompany his piece and with his powerful voice, he sang merrily of his Tibetan root. The crowd was left in awe of this feat and it was not difficult to see why. After all, how often have you seen a one man’s band from the east?

INFUSION 2019 was organised with diversity in mind and it achieved said goal spectacularly. If there is anything to take away from the event, it would be the fact that diversity does not always mean animosity. It can, and should always be, about unity.

“Serenade for the Nation” really existed on Soundsekerta 2018!