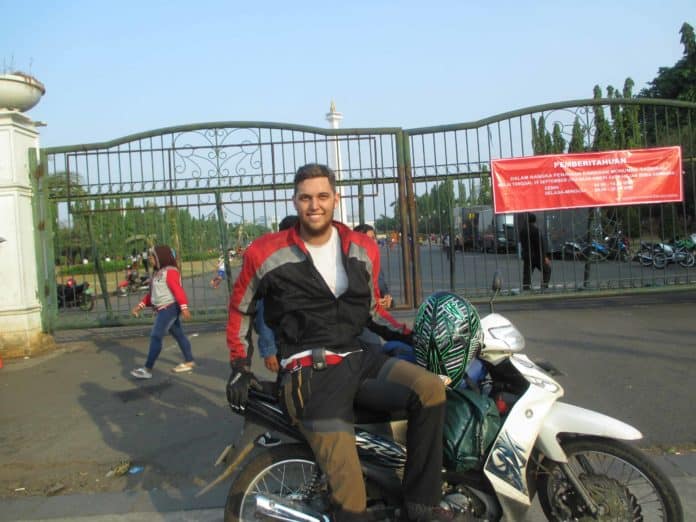 In support of the Victorian Heart Foundation, I undertook a motorbike journey during August and September of this year. I have always been a keen motorcycle rider, especially while living in Indonesia. I had spent six months studying at Gadjah Mada University, during which time, I took to the roads of Central Java for a few nights at a time. However, this trip would be substantially more arduous and risky.

My plan was to ride down the length of Sumatra, from Banda Aceh in the north, to the ferry, south of Lampung and then onto Jakarta. My aim was to raise $3,000 for the Victorian Heart Foundation. My grandfather passed away from a heart attack in 2013, which is why I chose the Heart Foundation as the beneficiary. Before starting the journey, I was quite apprehensive. While I speak Indonesian, I had never been to Sumatra. The journey I knew would be over 3,500 kilometres, on some of Indonesia’s toughest roads. While I had not planned my exact route, I knew the cities I wanted to visit, and that the journey would take 25 days to a month.

After completing a language program in South Korea, I flew straight to Banda Aceh. My first project was to buy a motorcycle. I bought a 2010 Yamaha Vega, a semi-automatic, 125cc bike. Lots of people ask me why I didn’t buy a large motorcycle, but there were a few good reasons. Firstly, if I bought a large motorbike, parts are very hard to find. Furthermore, with the scooter style bike, I could store my waterproof bags in the gap in-front of my shins. That meant I did not have to sit forward in the saddle. Also, the 125cc engine used hardly any fuel.

I set off from Banda Aceh on Friday the 15th of August, and started my trip with a tour of Aceh. I spent nights in Melauboh, Takengong and Langsa, before moving on to North Sumatra where I fell in love with Lake Toba. Following Lake Toba, I met friends in Pekanbaru before crossing the equator to Bukittingi, and onto Padang. From Padang I rode south to Sungai Penuh, then east to Jambi, Palembang then Lampung.

The journey took 25 days, and I arrived at Monas on the 7th of September, with more facial hair than before the 3,732 kilometre ride. The trip had been amazing, and I was overwhelmed by the kindness of everyone I met. Every time I stopped, I was offered food, drinks, fruit, clove cigarettes, invitations to lebaran celebrations, and even some daughters. While I politely declined the daughters’ hands in marriage, the smiles and welcomes I received were heart warming.

One highlight of my journey was all the mutual friends I was able to spend time with. My friend in Melbourne, Marcus Tantau, hooked me up with his friend, Boim, in Banda Aceh. Boim helped me immensely in purchasing my motorbike, and getting ready for departure. He also let all his friends throughout Sumatra know I would be on the road. That meant that in all the big cities, I had an instant network of friends, who showed me their city, and the culinary delights. Without this network of friends, my trip would not have been so wonderful.

As for me now, I have begun an internship with the Jakarta Globe newspaper as an editor while I find a full-time job. I am already planning the next ride too. I am tossing up the prospect of either a lap of Borneo, including Malaysia and Brunei, or a ride from Makassar to Monado in Sulawesi. Either way, I have the motorbike bug, which is proving hard to shake.