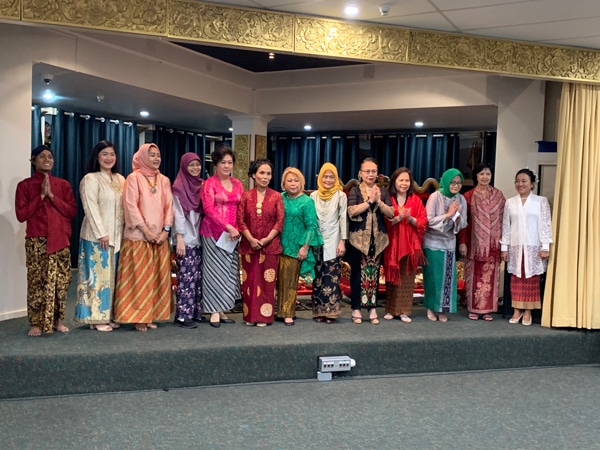 The April month of 2019 brings us two special days on the calendar – Easter and Kartini Day. As it so happens, both occasions fall on the same week as well! On 20 April 2019, the Bhinneka room of The Consulate General of the Republic of Indonesia in Melbourne located at 72 Queens Road was crowded with visitors coming in and out of the room. Ladies donned in colourful and beautiful kebaya and batik thronged the room as they caught up with one another and enjoyed their reunion. The gathering was to commemorate Kartini Day that falls on 21 April every year and to introduce the new members and committees of Dharma Wanita Persatuan (DWP) in Melbourne. Aptly themed Kartini-Kartini Melbourne, the day featured a talk show unpacking the roles and contributions of Indonesian women in Melbourne and what it meant for the community. 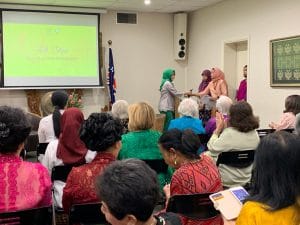 As the guests settled down and took a seat, the session began with a gamelan performance by members of Dharma Wanita Persatuan. With melodious tune permeating throughout the room, the talk show session would soon start. For the talk show, there were three speakers invited to the discussion: Ms. Spica A. Tutuhatunewa, Dr. Sony R. Simanjuntak and Ms. Elina E. Simbolon. Moderated by Mrs. Karina Fajrin, the talk was in session at promptly 10:00 A.M. 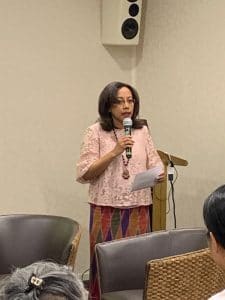 The topic of the talk was on woman emancipation and how it had evolved throughout the year and centuries. Ms. Spica A. Tutuhatunewa chronicled how she has seen the effort of many Indonesian women here in Melbourne in their attempt to give back to the community. It warmed her heart to see the many achievements and hard work put in by Indonesian women here in Melbourne despite being far away from their land of birth. Dr. Sony R. Simanjuntak added by relating the effort of women today and the movement started by Ibu Raden Adjeng Kartini when she first championed education for women in Indonesia. She stated that despite the challenges of being a migrant, one should not be afraid to dream big and should always give back to the community. Ms. Elina E. SImbolon also shared her own journey in breaking new ground. Her fine art journey had seen her using industrial equipment such as pipes and cement in her craft. She hoped that by doing this, she could send a message that women are more than capable of making use of unconventional materials and methods to create something beautiful and meaningful. 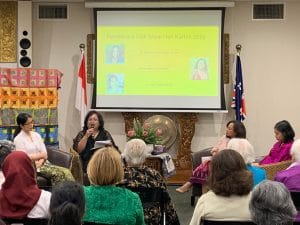 As the floor was open for Q&A session, audiences were encouraged to ask their burning questions to the speakers. One question stood out among the rest: How is it possible for women in Aceh to pursue their own emancipation given the state law governing women in the province? Ms. Spica A. Tutuhatunewa answered by stating that while it might seem almost impossible due to the state law enforced in Aceh, there might be hope for coming generations should there be more women in the governmental office. Having more women in the governmental office would make the collective voices of women more powerful and there might come a time where the voices would be strong enough to encourage changes in the law. She encouraged women to always motivate their daughters to be educated and be involved in the law as they will be the one to change the future. Almost immediately, the crowd applauded, lending further credibility to the audiences’ approval of the powerful answer.

There is much to learn from a seemingly simple morning talk. So the next time you show up, be sure to ready yourself for a session of wisdom and reflection.

Maintaining a Healthy Lifestyle for Your Body