It was the final day of November 2013 and just three short months earlier I had graduated from university. Having been unceremoniously fired from my first full-time job only a few months after graduation, I was now arriving in Jakarta for what would prove to be the biggest adventure of my life so far. From the moment I exited the excessively air-conditioned international terminal of Soekarno-Hatta airport, stepping outside into the harsh noise and humidity, whilst navigating my way through countless hawkers and ojeks to a bemused Bluebird taxi driver, I knew I had arrived somewhere very different to home. But that was just fine. Despite the initial culture shock which hit me quite hard in my first week in Jakarta, I ended up staying in the country for 3 months, forming solid friendships in that time, gaining some valuable (unpaid) work experience at a local advertising agency, travelling across Java, Bali and Northern Sumatra and most usefully, learning basic Bahasa Indonesia. I arrived for adventure and the opportunity to experience life in a foreign country very different to Australia. Indonesia delivered that experience in spades, with navigating daily life proving to be a real adventure itself. Here’s just a few of the more noticeable differences I encountered!

It became apparent very quickly that everyday life in Jakarta or any big Indonesian city for that matter is an incredibly loud affair, with everyone’s schedule dictated by the horrible macet that seems to have grown a mind of its own. Add in the non-existent footpaths in large parts of the capital, not to mention torrential downpours leading to occasional banjir and the situation can best be described as perpetual pandemonium. In stark contrast to the orderly rhythm of everyday life in Melbourne, Jakarta’s streets were positively bustling with humanity at all hours of day and night. A sense of orderly chaos pervades the air, making even a short 5 KM trip to visit a friend at a local shopping mall an exercise in military-precision logistical planning to outsmart the nightmarish traffic. Everytime I return to Melbourne the streets outside the CBD feel eerily quiet and the pace of daily life, well…. very predictable. I often find myself yearning for the constant excitement of Jakarta; despite the relative ease of living here! 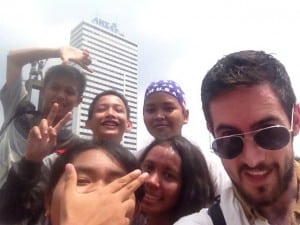 My favourite thing about Indonesia is the Indonesians themselves. Take Jakarta for example, despite the oppressive humidity, horrible traffic, pollution, flooding and perpetual pandemonium the smiling locals are amongst the friendliest most laid back people I’ve ever met – ever more so in the villages of Java, Bali and Northern Sumatra I had the opportunity to visit. Contrast this with a not insignificant chunk of the Australian adult population who are stressed, short-tempered (road rage for example) and arguably quite cynical about the world at large. I’m sure many Indonesians suffer these same feelings from time to time, but they certainly don’t vent their frustrations publicly in the same way a lot of urban Aussies do!

Don’t get me started on Indonesian food! It’s colourful, delicious, spicy, available from charming warungs in just about every inhabited corner of the country and even better – it’s ridiculously cheap, at least by lofty Australian standards. Where $1.50 would be lucky to buy you a single dim sum in Melbourne, for that same amount (Rp 15,000) you could buy an entire bowl of steaming Soto Ayam from a Jakarta warung and still be full until your next meal.  Likewise, in Australia the only place you can buy meals are from established cafes or restaurants, although a vibrant food truck scene has emerged in the capital cities – I guess you could call them our own fancy and expensive version of the humble Indonesian warung!

Perhaps the most interesting differences I noticed between both countries lies in our cultures. While it’s very hard to define a country of over 240 million (or 24 million for that matter) by a single attribute, it’s safe to say family and community play a much larger role in everyday life for Indonesians than it does for Australians. Whether its sharing communal facilities in a crowded Jakarta kampung or looking out for each other’s children in a rural village, Indonesians by economic necessity tend the rely on those they know far more than Westernised Aussies who are  more individualistically-minded, although this doesn’t necessarily mean more selfish.

One area where Indonesia does trump Australia in the predictability stakes is when it comes to weather. Whilst the climate across the archipelago is a very hot, humid and sunny average of 30-35 degrees almost every single every day, Melbourne’s weather on the other hand is best described as “4 seasons in one day”. You could begin your day with a cool, overcast morning, followed by a midday storm only to end the afternoon with clear skies and sunshine. Unlike Indonesia Melbourne is very fortunate to experience 4 distinct seasons, but I’d prefer they were spread across the entire year and not all in one day as is so often the case!

Text and photos by: Michael Reardon