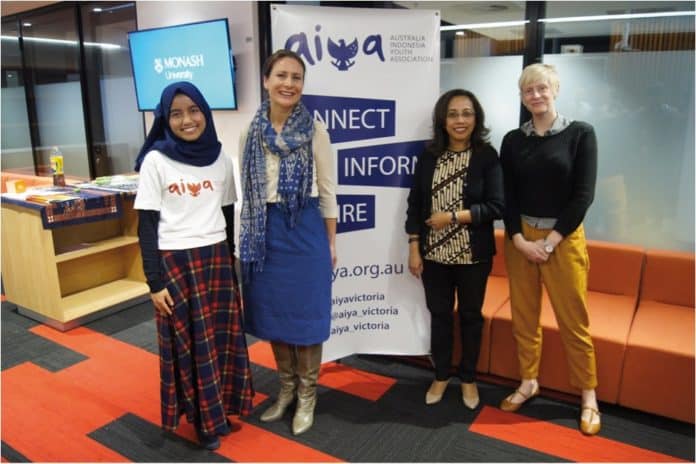 Is there more to the Indonesia-Australia relationship than beef, boats, bombs and Bali? This was one of the questions put to former Australian foreign correspondents to Indonesia, Jenni Henderson and Jewel Topsfied at an informative discussion held by the Australia-Indonesia Youth Association (AIYA) on Thursday 24 May.

Both Jenni and Jewel have extensive experience in Indonesia, having covered events such as volcanic eruptions across the archipelago, people smuggling, the executions of convicted drug traffickers Myuran Sukumaran and Andrew Chan, and general and local elections.

The discussion included questions such as how to keep yourself out of trouble when navigating difficult situations as a journalist, and why certain news stories such as boats or Bali attract more public attention in Australia than other news.

Audience member Erin McMahon, who is as an Indonesian teacher in Melbourne, told a compelling story about how some of his students were responsible for helping victims of the 2006 earthquake in Yogyakarta (centred in Bantul south of the city). When Erin tried to get the ABC to pick up the story they were not interested; it wasn’t until later that the radio station triple j agreed to interview the students. 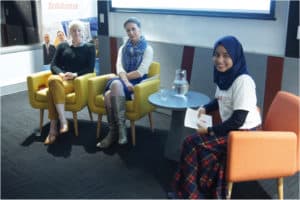 “Sometimes it can be hard to find the right [media] outlet or someone who will listen, but I’m really glad triple j picked it up, because it’s talking about young people and that’s [triple j] a platform to talk specifically about good things and bad things that happen to young people,” explained Jenni in response to Erin’s frustration with the ABC.

“I’d say one of the difficulties with reporting stories is that you have finite resources and you’re often competing globally with other [natural] disasters,” added Jewel.

Jewel also acknowledge that Australians are more interested in Indonesian news coming out of Bali. She told the audience about a time when she waited for several days for an expected eruption to take place on Mount Agung in Bali. Before anything could happen in Bali, a massive volcanic eruption took place at Mount Sinabung on the island of Sumatra. Despite the larger scale of this eruption, the media chose to focus on the events unfolding in Bali rather than Sumatra.

“I think the difficulty is to get editors to care and connect with your story,” explained Jewel.

Following the discussion, the panel and audience members broke the fast together with a variety of delicious Indonesian snacks.

Jenni Henderson has previously worked in online and television journalism for the ABC and for Reuters at their Jakarta and Kuala Lumpur bureaus. Jewel Topsfield was the Indonesia correspondent for The Age and the Sydney Morning Herald between 2015 and 2018. The discussion was moderated by OZIP journalist and Master of Communications and Media student at Monash University, Evelynd.